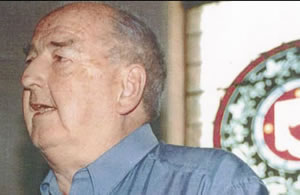 He came to Redfern by choice. With two other priests he elected to go where he could form a ministry following Jesus in companionship and solidarity with the poor and dispossessed. Here he made his first contact with aboriginal people. He was shocked and appalled by the violence done to their lives. Encountering their poverty was transforming. He spoke of finding in aboriginal people a nobility and gentleness that had been wrought by suffering.
Father Ted Kennedy died on 17 May after a long illness. Parish Priest at St Vincent’s Church Redfern for thirty years from 1971 to 2002 he was a true toiler for the people of South Sydney. He was the beloved pastor of the church. Above all he is the loved figure for the aboriginal people.

Father Ted was born in 1931 into a family with deep and wide roots into Ireland and the Catholic Church. On one side he is descended from an Irishman transported in the nineteenth century. On the other from Irish gold seekers who in the 1860s settled in the Araluen valley on the NSW South Coast. He was brought up in Marrickville, one of five children. The influence of his parents was strong. John Kennedy was a General Practitioner welcoming all into his surgery, waiving his fees for anyone unable to pay. Peg was devout but critical of clerical practice.

Ted trained for the priesthood in the years after the Second World War. His sharp and inquiring intelligence was evident in the keen interest he gave to his studies at the training seminary. It was evident in his ministry from his grasp of theology and biblical scholarship.

He was Chaplain at the University of Sydney from the late 1950s to 1965. He gave to the students a vision of the Church as actively concerned with the life of the world. He brought the influence of European theologians and the Young Catholic Worker movement with its deeply Christian outlook of looking for God in the ordinary lives of people. He gave leadership by inspiration and affection with a special gift for inspiring the young.

His obvious popularity and informality with students was rebuked by the then Cardinal. He was in effect squeezed out of this position and banished to suburban churches.

He came to Redfern by choice. With two other priests he elected to go where he could form a ministry following Jesus in companionship and solidarity with the poor and dispossessed. Here he made his first contact with aboriginal people. He was shocked and appalled by the violence done to their lives. Encountering their poverty was transforming. He spoke of finding in aboriginal people a nobility and gentleness that had been wrought by suffering.

One of the tributes at his funeral spoke of his falling in love with the aboriginal people. It was a love lived every day. It became a way of living a life of hospitality and welcome. It gave depth to his understanding that in the lives of the poor one found Christ. It was the basis for his theology of the poor.

Ted told a story of being woken at 3 AM in the morning by an aboriginal man. He was a squatter and he asked Ted to come to his squat and tell the others there about Christ. He was shocked by their living conditions. He thought how could he talk about Christ and then return to his own warm bed. It was a signal moment. He determined that it was not enough to talk about but he had to live as Christ.

His anger at seeing daily misery, oppression and harassment of aboriginals led to action. In response to their poverty he opened up the Church hall and presbytery to aboriginal people for shelter. In response to police harassment he gave protection. This included guarantees to the Court. He never judged or asked for particular religious observance. Along with others he was instrumental in the establishment of aboriginal run services. These include aboriginal housing on The Block and the Aboriginal Medical Service.

His collaboration with “Mum” Shirley Smith, an aboriginal woman of enormous ability, gave muscle and vigour to his ministry. She came to him on the basis of his reputation and became his inspiration and support. It led to a practical collaboration of giving service at all hours of the day and night.

It was also much more, for Ted saw Mum Shirl as a natural theologian. She opened up new depths of the gospel and what it meant to live as Christ.

Over his years at Redfern he extended his hospitality to anyone who felt the pain of exclusion. His openness to homosexuals was a rebuke to the intolerance of society and Church.

Ted was not just a marginal figure living a special life. He was and remains central to the Church. His theology and humane outlook is seminal. It touches the lives of anyone who experiences intolerance or discrimination. His work is prophetic because it provides a direction for the church everywhere. His book Who is worthy? takes the Catholic Church head on by questioning where its real interests lie today.

He was fearless in his confrontation with church figures who showed indifference or intolerance to the needs of people. His powerful expression of a theology of the poor was expressed every week in his sermons at St. Vincent’s Church. It is a theology from experience. It reflects his scholarship and draws on the long and deep traditions of the Church. He was a universal figure and a person of humility and gentleness. He could appeal to and attract people from every walk of life. His influence is shown by the thousand or so people who attended his funeral on 24 May at The Block.

Ted is survived by the loving family of his sister Marnie and his nieces and nephews and their children. And by the family of the aboriginal people who adopted him as their father.