However the Neocats soon imposed their agenda for the afternoon when parish priest Prindiville was heard muttering that it was “crap”. He followed this, after the Gospel, by forbidding a performance of reflective music from Bach’s Passion According to St Matthew, despite arrangements to secure the services of a flautist and an organist especially for the occasion.

Instead the congregation was subjected to a 15 minute sermon, on a day when the long Gospel reading is usually followed by a brief homily. It was the most culturally inappropriate and confronting piece of ham theatricality imaginable, with Clesio Mendes (assistant parish priest) shouting, yelling, play acting at being the crucified Christ, and crying out “Daddy, Daddy, save me!” Had this crass piece appeared on some distasteful comedy show it would have been bad. Coming from a priest on Good Friday it was beyond the pale. 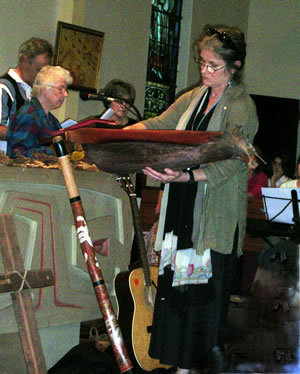 It has long been a custom at St Vincent’s on Good Friday and other appropriate occasions to remember the dead of the parish – in particular deceased Aboriginal friends buried by Ted Kennedy – by reading their names from a disturbingly long list. This year it was particularly poignant as both Bob Bellear and Ted himself had died since the last Pascal Triduum. At the mention of each name, autumnal leaves, individually selected for their beauty, were tenderly placed along the front of the altar. Their placement was accompanied by the singing of a liturgical response at regular intervals. The simple symbolism of this gesture was appreciated by (almost) all.
As the participants readied themselves, Mendes spoke to Prindiville, who nodded, and Mendes headed for the sacristy with the acolytes – presumably to get the Cross for the Adoration. As the names were read one of the acolytes stood outside the sacristy, and was soon joined by the others. They talked and sniggered for some time. Mendes and one of the acolytes turned their backs to the altar. One upset parishioner approached them; an acolyte nudged Mendes who swung around with a wide grin on his face.

After the remembrance, and just before communion, Prindiville stormed around to the front of the altar and callously swooped all the leaves onto the floor [movie]. 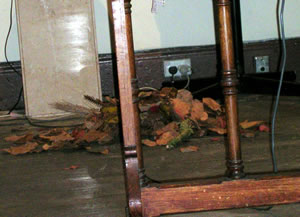 A number of parishioners moved to collect the leaves in a palm pod, and returned them to the altar. 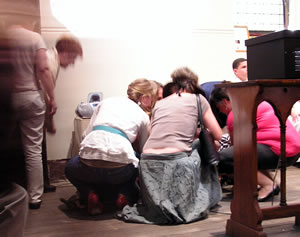 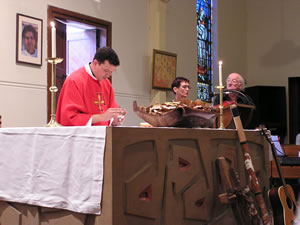 The community felt shattered by the desecration. Some could not bring themselves to receive communion from the perpertrators. An elderly couple left the church saying that it was abominable and that they could scarcely believe how these “priests” had dishonoured the Aboriginal people. The man was sobbing.

Some newcomers to the parish – a family with two teenagers – were shocked and asked a parishioner what could be done. They remarked that the clerics were behaving “like robots” in the face of community efforts to acknowledge Aboriginal presence and create a fitting liturgy for the occasion.

Everybody was distraught. One elderly nun left the church weeping. Many did not return for the Easter Saturday ceremony, which had the smallest attendance in living memory.

==
Since Sorry Day 2005 and the calling of police to Redfern, there has been no change in the behaviour of these clerics. They show no interest in Koori or white parishioners’ concerns. They are not only clueless but callous. They exhibit no moral, creative or compassionate capabilities. They have no capacity to make the gospels relevant. Instead they attack the insight and creativity they envy.
Bookmark the permalink.

One Response to Good Friday – a sorry day