From the Braidwood Times
Thursday, 8 September 2005

Father Ted Kennedy, the much beloved friend of the aborigines and former parish priest of Redfern was buried in May from the Block in Redfern with much ceremony but very little pomp. This unique event, which took place in a huge marquee erected especially for the occasion, will not be easily forgotten by the many hundreds of people who turned out on that overcast Tuesday in May. It was a stirring celebration of the life of a remarkable priest and an extraordinary man. 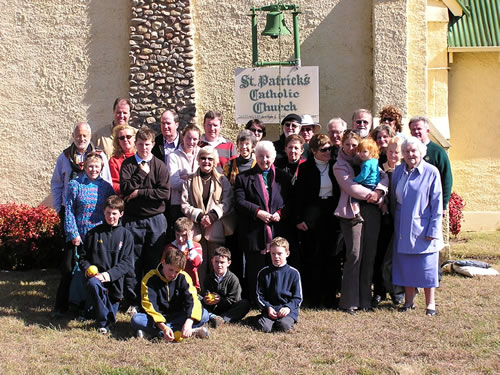 On Sunday 14th August a small group of family and friends gathered in the tiny church of St. Patrick’s in the beautiful Araluen valley to celebrate a memorial mass for Ted. Ted’s sister Marnie and Ted’s niece and nephews and their families were all present as were Ted’s cousin from Ireland, Ted Casey and his family. Father Mark Croker the parish priest of Braidwood and Bungendore, knowing of the Kennedy connection with the area, had kindly offered to say the mass.

Ted himself had had a great love of the area and had introduced many of his friends to the delights of the district. He had often celebrated mass in St. Patrick’s in his earlier days. His family had a long association with Araluen and he loved nothing better than to spend time in the valley. He was particularly delighted in the last few years with the family plans to build a new house and in the knowledge that there was to be a continuing Kennedy presence in the valley.

This was a more modest, personal and intimate occasion than the great Redfern celebration. Nonetheless it was a fitting complement to that splendid public celebration and it dealt with less well known but important facets of Ted’s life such as his pivotal role as chaplain to Sydney University. There was an opportunity too for fond reminiscence and touching tribute, and Ted’s nephew John provided details of the family’s Araluen history. Ted would have been particularly delighted in the wonderful singing of Christine Tilley and the reading by Jeremy Nelson of some of his own poems.