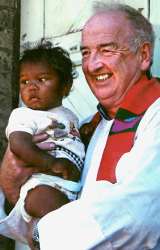 Although he chose to discontinue Fr Kennedy’s style of ministry in Redfern’s St Vincent’s Parish, Cardinal George Pell yesterday paid tribute to one of his best known priests.

“Fr Ted Kennedy was a good and courageous priest who inspired many people,” he said. “He was a man of strong convictions who worked hard to help those on the margins. He will be sadly missed by his friends and former parishioners.”

“He managed to incorporate the best of Catholicism into his personal life, which was evident in the way he related to the poor, the outcast and the downtrodden,” said Mr Dodson. “He was always prepared to share his own belongings with anyone in need.”

Fr Kennedy entered the seminary aged 18 and was ordained in 1953. He moved to Redfern’s St Vincent’s Church in 1971 and established a network of priests to support the local Aboriginal community for more than two decades.

Although his health had deteriorated markedly, he maintained a close link with the community and was sensitive to their suffering, his sister, Sister Marnie Kennedy said.

His sister Sr Marnie Kennedy – of the Religious of the Sacred Heart – told the ABC’s PM how Fr Kennedy faced the challenge when he was appointed to Redfern in 1971.

“Without knowing anything about Aboriginal people, that was the extraordinary thing,” she said. “And as soon as he reached Redfern, of course, he encountered the marginalised situation there. And instead of putting it under the carpet he faced it, and he opened his presbytery in 1971 to the homeless Aboriginal people that were flooding Sydney from – many from Brisbane at that time because they’d just received citizenship, and they used to come to Redfern as a Mecca. He welcomed them, and they lived with him – a hundred or so in the presbytery – for years.”

His funeral is expected to be held on Tuesday.