By admin | 8 June, 2005 - 9:17 am |8 June, 2005 Uncategorized
Redfern Police Chief Ian Moore says that the ongoing tensions at the Aboriginal Catholic church at Refern sound ‘like a bit of a domestic’ and that the Church should ‘sort itself out’ instead of threatening to call the police on one another.
Commander Moore was responding to questions following a letter written by Sydney Auxilliary Bishop Dr Anthony Fisher, to the parishioners at St Vincents, Redfern, in which he said he had directed the parish priest, Fr Gerry Prindiville and his assistant, Fr Denis Sudla, to contact the police ‘if there are any further disruptions to the Mass.’ Bishop Fisher says his intervention was foraced by the harrassment of clergy by some parishioners.

Commander Moore, who has been a police officer for 37 years, said he had never attended an incident at a church. He said police would judge each matter on a case by case basis and that police could only act where a crime had been perpetrated. 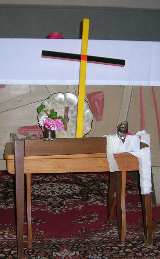 It is understood that the incident which has sparked the current row involved Fr Sudla’s objection to the use of a small table, known as the Aboriginal altar, which has for some time been brought up to the main altar at the Prayers of the Faithful. Parishioner Sr Marnie Kennedy rsj, sister to the late Fr Ted Kennedy, explained that an Aboriginal designed cross was placed on the table, and brought forward as a special memorial to honour all the Aboriginal people who had suffered or died as a result of European settlement. “As Pope Paul VI taught, every individual church is ‘heir to cultural patrimony and a vision of the world’. Ours is to honour Aborginality appropriately, as part of the celebration of the paschal mystery”, Sr Kennedy said.

However Fr Sudla is alleged to have lost his temper and kicked the small table to pieces, during a Mass last weekend. A parishioner remonstrated with the priest following the Mass, during which time harsh words were exchanged and, it is alleged, threats of violence made. The police were called. Commander Moore said that the police were told that a person who was not a member of the St Vincents community had entered the church and in a breach of the peace, had refused to leave.

At the time of going to press, parishioner Peter Manning, a lecturer at UTS and a former executive producer of the ABC’s 4 Corners, was convening a meeting to consider a response.

Bp Fisher last night told Online Catholics that his recent intervention was forced on him by the “escalation of pressure” upon the clergy at Redfern. “I believe there is harassment from a very small group disgruntled by the appointment of their priests – and/or their membership of a particular ecclesial movement – and/or their pastoral and liturgical style,” Bishop Fisher said. “Most of the Mass-attenders have come to join the clergy peaceably in their house, when Mass has had to be abandoned due to the protesters,” Bishop Fisher said. “I would have hoped the priests would receive the care and support not only of most of the laity but also of any clergy and religious around them. I dearly hope that the disruption of the Sacred Liturgy will cease and that the priests will be allowed to do their work as priests.”

Sr Marnie Kennedy, who is a spiritual director by profession, believes that the underlying problem at Redfern stems from a clash of worldviews between the community and the Neo Catechumate priests. “There are many Australians still suffering from the effects of Jansenism, which holds that human beings are innately and fundamentally sinful. This view emphasises and encourages a sense of guilt,” she said.

“This view fails to respect Aboriginal spirituality and culture. It de-emphasises human dignity while promoting the authority of the (non-Aboriginal) priest. It is the very worst expression of Catholicism for an Aboriginal community. It is as though colonization is happening all over again.

“As one Aboriginal woman cried recently, ‘we are treated like lepers by these priests. They do not seem to want to speak to us or come near us’,” Sr Kennedy said.

Bishop Fisher said yesterday that the Sydney Chancery is handling matters in dispute at Redfern. But he added: “If there are church-going Catholics, including Aboriginal Catholics, in the parish who want to express concerns to me they are always free to do so; I will do what I can within my responsibility, including, if they like, entering informal discussions if invited.”