A little sympathy for Prindiville?

The following curious article appeared in The Australian today.

It should be noted that the good Cardinal was not criticised so much for his opinions on how to help the Aboriginal community, as for the implication by association in those words that the St. Vincent’s community is involved in such activities.

It should also be noted that yesterday was Hiroshima Sunday, so the liturgy included a number of uncomfortable (leftwing?) reminders of the past – such as the sad fact that the atomic weapons dropped on Japan were blessed by Catholic priests before they were deployed, and that the small Catholic population of that country was decimated in the devestation caused by those bombs. 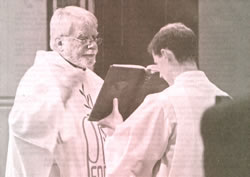 Forced to listen: Father Gerry Prindiville, accused of being out of touch, presides at St Vincent’s in Redfern, Sydney, yesterday. Picture: Chris Pavlich

CARDINAL George Pell was repeatedly criticised during mass yesterday in Redfern for saying that handing out syringes and condoms was not the way to help the Aboriginal community.

The Archbishop of Sydney made the comments to The Weekend Australian in support of the parish’s conservative clergy, now at loggerheads with their turbulent inner-city congregation with its strong liberal Catholic tradition.

Aboriginal deacon Frank Cain received a standing ovation yesterday when he told the congregation he was proud to be involved in the painting of a mural a week ago, on one of the internal walls of St Vincent’s, which marked an escalation in the conflict.

“This mural is not a sacrilege in any way, shape or form,” he said.

“We ask that the church respect the mural for its theological and spiritual symbolism, cultural nature and reconciliation themes.”

The parish acquired a strong social justice agenda under the 30-year leadership of Father Ted Kennedy, who died last year. Since then, there has been a growing divide between the clergy and parishioners, including the mentally ill, alcoholic and Aboriginal.

The unauthorised mural, painted without the permission of parish priest Gerry Prindiville, quoted John Paul II: “Your dreaming is your own way to touching the mystery of God’s spirit in you and in creation,” it reads in part.

Father Prindiville, criticised for his lack of empathy with the local community and with Aboriginal spirituality, led the mass yesterday morning but was forced to listen while his largely left-wing parishioners repeatedly condemned or questioned the church and its hierarchy.

Sister Sheila Quonoey, who led the community commentary for the mass, continued the anti-authoritarian theme when she said: “God calls us beyond the boundaries of our comfort zones whether that space is physical, cultural, religious, racial or our own family. God’s word subverts our familiar world.”

She described the mural as a “wonderful image to give us courage, hope and commitment to true justice for Aboriginal people in this land”.

A spokeswoman for Cardinal Pell said he was overseas and not available for comment.